In most cases, upgrading an existing instance of SHRINE is a relatively quick process. Exceptions to this rule include older versions of SHRINE that contained substantial changes to configuration files and other portions of the file structure. The instructions here specifically describe an upgrade path from SHRINE 1.25.4Â to SHRINE 2.0.0-PR1.

This guide makes the following assumptions of a current 1.25.4 system. Make sure all of these conditions are satisfied before proceeding:

Before starting the upgrade process, make sure SHRINE's Tomcat is not running. Leaving it running during this process can cause problems, especially with unpacking new .war files. Simply run the following command:

Now that SHRINE is stopped, it is a good idea to back up the current versions of the components we will be upgrading. The exact method for making this backups may vary, but these instructions will place the backups in a folder called /opt/shrine/upgrade-backups.

Start by creating a folder to contain these backups:

Make especially sure that theÂ shrine-webclient/Â folder is backed up. If you choose not to make any backups, make sure to at least keep a copy ofÂ i2b2_config_data.js and js-i2b2/cells/SHRINE/cell_config_data.js!

Make especially sure that the shrine.keystore is backed up. If you lose the private side of a cert you may not be able to recover it.

SHRINE will use new components, so to avoid conflicts with older files, you can remove the old .war files with this command:

Also, you can remove all the existing folders from the /webapps directory:

Next, we will retrieve the new SHRINE war files from the HMS Sonatype Nexus server at:Â https://repo.open.med.harvard.edu/nexus/content/groups/public/net/shrine/shrine-war/2.0.0-PR1/.Â From there, downloadÂ shrine-war-2.0.0-PR1.warÂ to theÂ webapps/Â directory on the SHRINE server and rename it toÂ shrine.war.

Like other SHRINE artifacts, the SHRINE API Service can be found on the HMS Sonatype Nexus server atÂ https://repo.open.med.harvard.edu/nexus/content/groups/public/net/shrine/shrine-api-war/. From there, download shrine-api-war-2.0.0-PR1.warÂ to theÂ webapps/Â directory on the SHRINE server and rename it toÂ shrine-api.war.

Since SHRINE 1.25.4, there are a couple of changes to SHRINE's configuration file. If you want to, skip ahead to the sample shrine.conf section and copy the entire contents of the file for use (replacing with your own site specific values).Â

Each node can ask the hub about itself and the hub. To ask about itself it needs a shared key with the hub. This will be a unique identifier, something like "HarvardProdNode". Add that to shrine.conf:

Remove the QEP user from the PM cell, andÂ corresponding section from shrine.conf

Shrine now accesses the DSA's database directly from inside shrine-api.war. It no longer needs a special QEP user. Delete that user from the PM cell, and remove this section from shrine.conf:

Configure the webclient in shrine.conf

In SHRINE 2.0.0-PR1, you will need additional parameters to configure the behavior of the webclient. Please add this section in shrine.conf:

The nodeKey property is used by SHRINE internally instead, and the node structure (stored at the hub) holds a real human-readable name with a good assortment of punctuation and spaces, therefore, you will not need this line in shrine.conf anymore.

To redirect the old URL and preserve existing bookmarks and history in browsers, specify a URL rewrite in Tomcat.

1. Add rewrite valve to conf/server.xml inside the Host configuration section

2. Create a file nameÂ rewrite.configÂ in conf/Catalina/localhost with the following contents

No need to specify a slick driver anymore

Now the system can select the slick driver based on theÂ shrineDatabaseType property in shrine.conf.

If the selected slick driver causes problems it is OK to use the old properties - which will override the one chosen viaÂ shrineDatabaseType.

Here's a sample shrine.conf for a 2.0.0-PR1 downstream node:

In SHRINE 2.0.0-PR1, there are a couple of database changes that you will need to perform to accommodate the new tables and structures needed for SHRINE to work properly.Â

Shrine no longer needs to store the actual (and mildly sensitive) actual count of patients from the CRC in its COUNT_RESULT table. In mysql remove it from the shrine_query_history database with

Shrine no longer needs to store the actual (and mildly sensitive) actual count of patients from the CRC in its BREAKDOWN_RESULTÂ table. In mysql remove it from the shrine_query_history database with

Add a status column for queries at the QEP

The only thing left to do at this point is start SHRINE back up. Simply do the following:

After starting SHRINE up, verify that the upgrade was properly deployed by checking the SHRINE Dashboard for the version number. The exact address you will need to go to depends on your configuration, but the general format looks like the following:

This is a sample screenshot of the upgraded 2.0.0-PR1 dashboard: 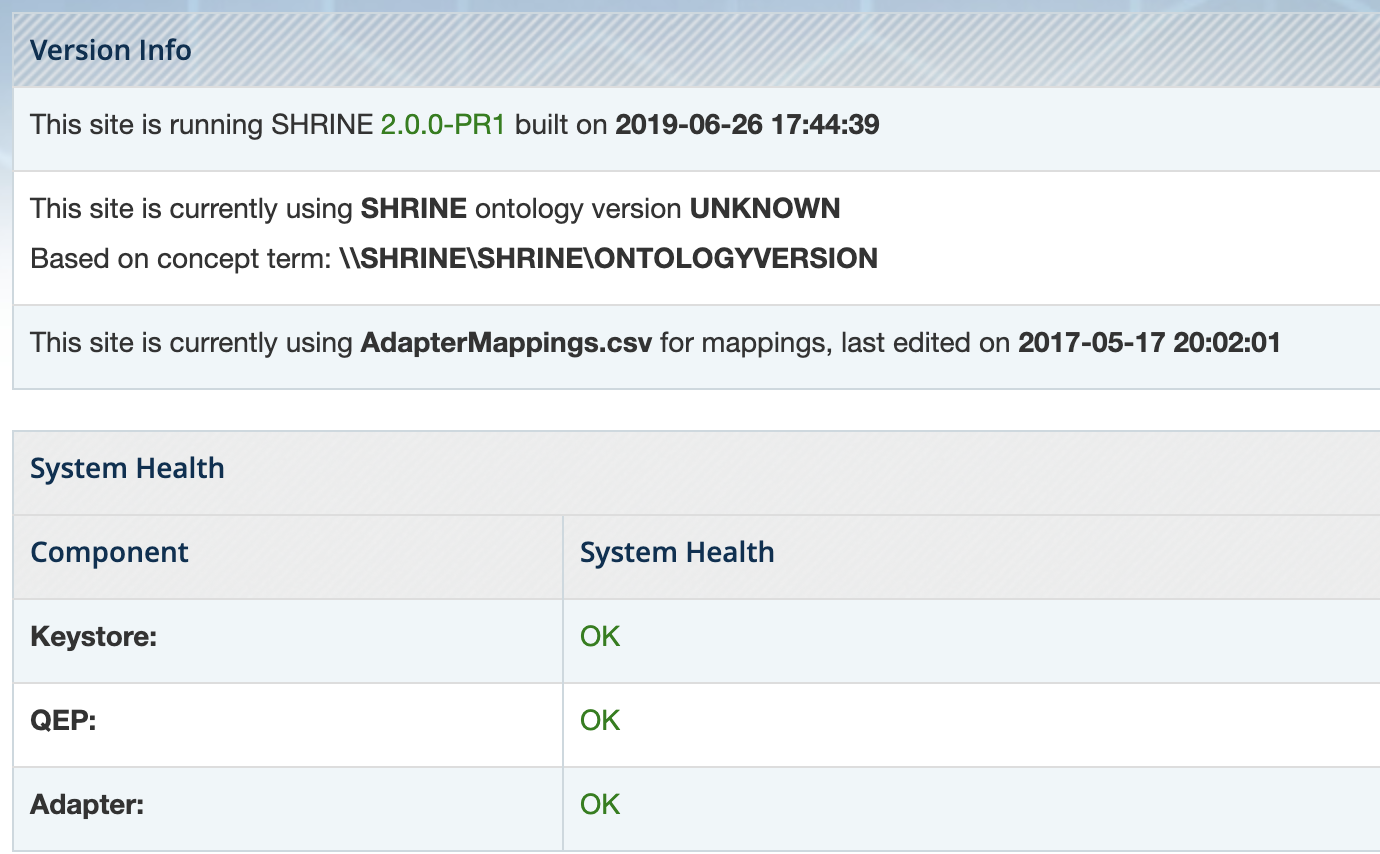